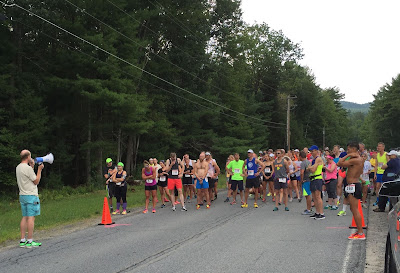 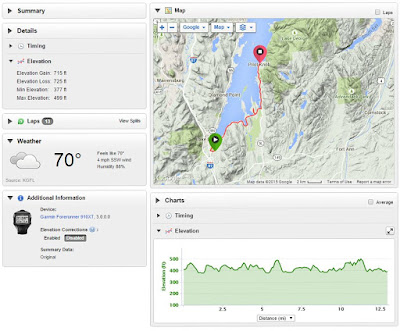 I love when I can make a race a family event!

I think part of growing up on Long Island is a visit to Lake George. My parents took us when we were kids and now I had the opportunity to bring my daughter and mother. We went up very early Thursday morning and spent the day at Great Escape. Then spent the rest of time doing things around the Lake including a ride on the Mini Ha Ha, white water rafting and visiting the shops. 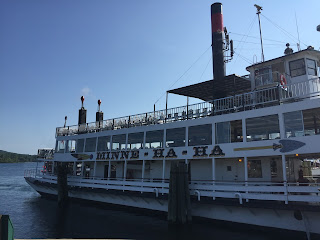 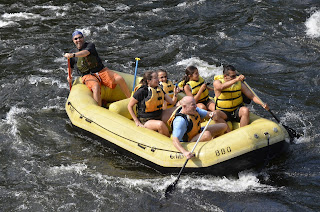 The hotel was just a 5 minute drive to the starting line. Arriving at The lake George Elementary School by 7:00 am was more then enough time to prepare for the 8am start. Packet pickup located inside the school gave us a comfortable place to sit and hang out with real bathrooms. Woohoo that's a BONUS!!! There were also a few portable toilets near the staring line located directly in front of the school. 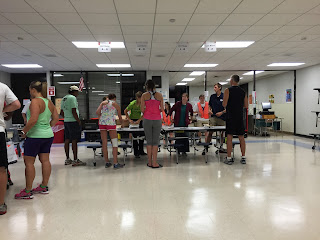 Our race director welcomed us as we gathered at the starting line . He talked briefly about the course, volunteers and history of the race. He gave a shout out and made a video for the course record holder Shaun Evens who is running across the country pushing  Shamus Evans. 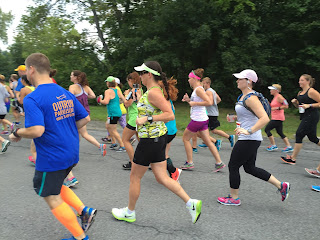 Be inspired to inspire.

It was made known that all the volunteers on the course were CIT kids from Camp Chingachgook. They are 16 & 17 years old in the Counselor in Training Program. I don't know what you were doing at that age but I certainly wasn't standing in the heat for 3 or more hours handing out cups of water and cheering for runners. These kids had amazing spirit!. Giving children of that age a positive goal oriented event to take part in will hopefully inspire them to do great things. It kept a smile on my face...you know the saying, "you never know who is watching that you'll inspire". I made sure to interact and thank as many as I could. 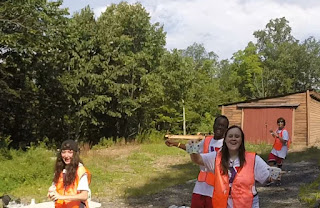 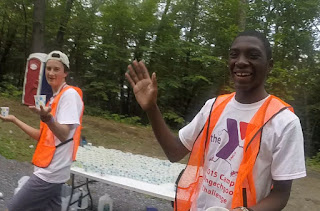 The mostly shady rolling course had views of Lake George and some of it's great homes along the water. Take that ride on the Mini Ha Ha if you can before the race. You will see the front of the homes while running that you notice while on the water. It is a bit of a winding road that is open to traffic so always be aware. The field did spread way out at the pace I was running.


I found everyone to be extremely friendly and chatted with some runners along the way. There is something to be said about a RD's happy and positive attitude trickling down through out the entire race. The time passed rather quick and while this was a very slow race for me the finish line came up rather quick. This time I had my family waiting for me. 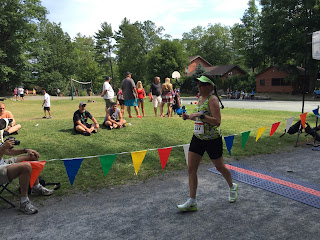 While they were waiting for me they enjoyed the Lake Views at Camp Chingachgook and watched runners jump in the lake. 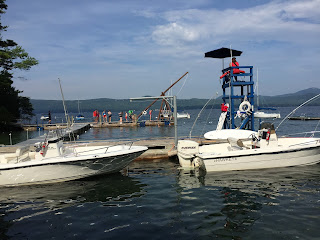 A nice post race buffet was put out for us that included grilled hot dogs, chicken, beans, coleslaw and watermelon. My whole family was able to eat sitting at shade covered picnic tables.  Let me add that after finishing just under three hours there was still plenty of food left. This has a been big an issue at many races.  There was also plenty of people still hanging out enjoying the day. 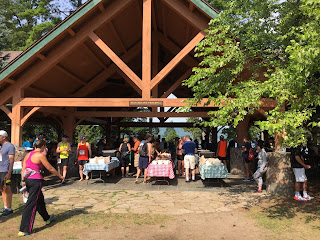 It was a great day and an extremely well managed event. I would highly recommend this race. Have you ever seen a cowbell as the medal? The running YMCA person on the tech shirt is so cute. 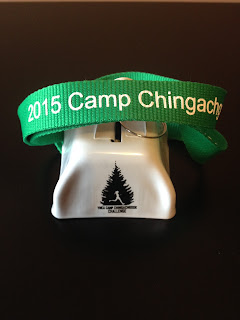 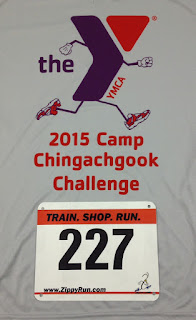 Thank You to everyone who was in this event. Well done! 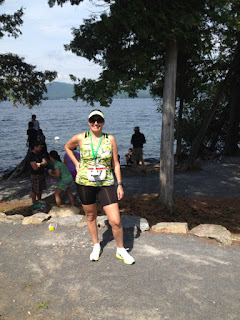