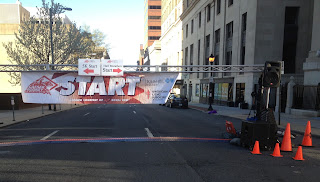 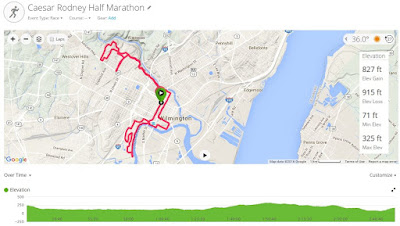 I will state immediately that is one of my favorite races. I ran it for the first time in 2015 and returned for the 2016 event. This year proved to be a challenge with high winds and cooler then normal temps. I was hearing many runners decided not to run it due to the conditions. This however didn't stop me from running one of the races I was looking most forward to.

There are many approaches to running a half marathon. If you scour the internet there is evidence to refute or validate each and every one. "Break the race down into manageable parts" is a very common suggestion. The Caesar Rodney Half marathon will help you utilize this approach. Why? .. you ask. Well because like the changing seasons this course offers changing scenery.

Taking you on tour of Wilmington Delaware the race starts in the city and passes through a wildlife refuge. After a quick few blocks back through the city you make way to Rockford Park running around the Tower. Then we are treated to a nice residential area before reentering the city towards the finish line. Each part of the course promotes a feeling of renewed energy.

There is a mix of both open roads and paths along the rivers. Cones on the open roads keep drivers  at a nice distance while police officers and volunteers do a great job at controlling the traffic.  Water was available often enough.

The finish line was welcoming with a race announcer announcer calling out your name. She even new it was my 105th half marathon. Thank you to the runner who asked me and told her. The Caesar Rodney race offers 100 Half Marathons Club members an exclusive discount.

Let's talk about the post race refreshments. Hot soup, pizza, bagels, all kinds of fruit, chips and energy bars were plentiful. Well done! Thank you to the Race Director and all the volunteers. 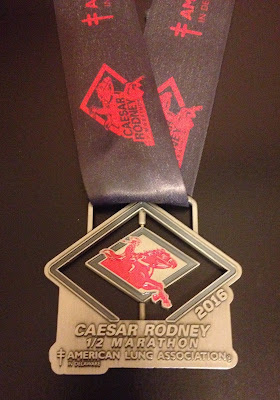 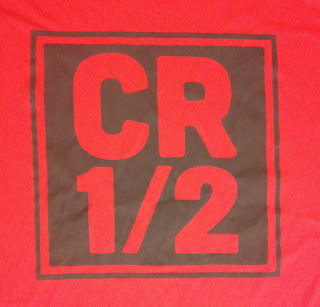