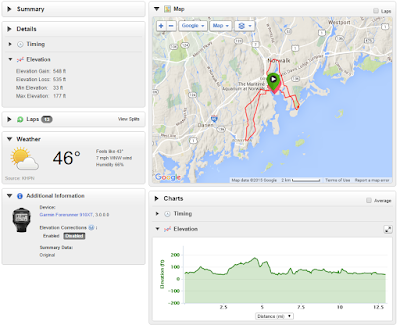 All I could think was Urban Trail Running?

I had been very excited for this inaugural race and registered back in December. I just love watching a race develop and grow. It's interesting to see what the race directors can achieve and how far they are willing to go with it.  As with anything the only limits are the ones you impose on yourself.

A steady stream of posts were made with new vendors and sponsors. More benefits for runners came through and I thought..oh this is going to be a great race. Clearly the RD's were attacking this full force from every angle.

Walking up to the staging area things seemed to be flowing smoothly. We easily grabbed our Bibs from friendly volunteers. There were enough porta potties. A bag check was located very close to the start/finish area with no line. Quick easy bag checks really make my day!!!! To be able to take a jacket off 15 minutes before the start and have it just steps away when you finish before you catch a chill is a huge plus.

After a few announcements and on time we were sent on our way.  After crossing the bridge and upon entering the town we were greeted by a large cheering crowd with a DJ pumping out the beats. Perfect to get the feet really moving and set the pace.

The course had a bit of everything which was perfect for keeping the boredom away. Unfortunately there were several areas of very bad traffic which had has running on the sidewalks. That's when the thought popped into my head..urban trail running. It became of game of jumping over curbs, dodging cars  and bystanders. Being a person who lets nothing get the way of my goals I embraced it.  Hey it won't be a fast fun but it'll be fun and I'll get to see this town.
All fun and games until a police officer put himself between me and a car.  It was a very busy intersection and a self absorbed driver who nearly hit me. That officer jumped on that car and banged on her windows so hard I thought they would break. Startled I could barely get the words "thank you" out of my mouth. You must know I don't wear headphones when I'm running. There is too much to be missed with music blaring in my ears. The sights and sounds of a race are what makes it so special. It's these moments among many that bring a race to life and give it meaning.

I'd never hear these people cheering if I had my ears stuffed. Nor would I hear the conversion of the runner next to me who is running their first half  marathon. The stories and friends I make along the course are what keeps me going back.

As we left the town the scenery changed and things felt calm.  Like a change of seasons the quite open landscape was a welcome site. It  was a chance to relax the breathing and once again, settle in.

We received  a nice tech shirt, medal and pint glass.  SoNo has acknowledged the traffic problem with open roads and plans to make improvements next year.  As an inaugural event it was the only problem I found. Runner safety needs to become the first priority.  I have no doubt with all the effort they put into the event it will be addressed. I plan to return and make this an event I run every year. I have to admit I found it fun ( except almost getting hit by a car but I'm the nut who will run just about anything in any conditions. Most of the time I don't care at all about the clock.   Can't wait to see it grow. 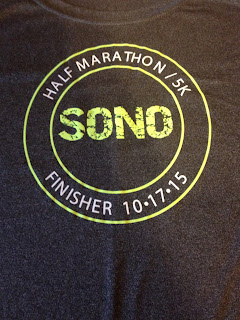 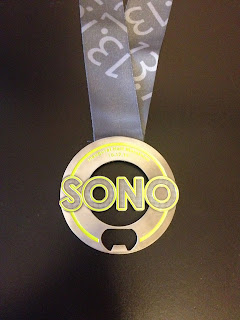